Mendham Golf and Tennis Club began in 1958 when 15 residents of Mendham purchased approximately 75 acres of land on Kennaday Road and sought members for a family-oriented golf and tennis facility. The property was owned by Mr. Sherwood Gay and when it was placed on the market, there were few interested purchasers. These 15 Mendham residents formed a corporation to buy the land, primarily to preserve the rural nature of the property. The February 8, 1958 Certificate of Incorporation states, ". . . the subscribers hereby associate themselves into a corporation not for pecuniary profit . . . to encourage, develop and promote the enjoyment of golf, tennis and other such recreational pursuits . . ."

In 1959, the Club began construction of three Har–Tru tennis courts and a swimming area in "Gay's Pond." Mr. Alfred Tull, a nationally known golf course architect, was retained to design a nine-hole golf course. Course construction began in 1960 for an agreed-upon contract price of $73,000. Construction continued on schedule and the "Grand Opening" of the first six holes was held on July 1, 1961. The remaining three holes were completed and ready for play in September of that year.

As membership grew from the original 78 family members and golf play increased, it became apparent that an additional nine holes would be required to assure ongoing success. In 1964, the Club purchased approximately 56 acres from a 300 acre tract on both sides of Corey Lane and supplemented this with an additional 31 acres purchased from the Club's neighbors to complete the necessary land requirements. Construction of the new nine holes, also designed and supervised by Alfred Tull, began in 1967 and the holes were ready for play in 1969. Full access to the four new holes east of Corey Lane was limited until the Club received special permission from the New Jersey Department of Motor Vehicles to allow motorized carts to cross Corey Lane.

During the summer of 1967, the Club's first clubhouse was built. Following a Mendham Golf and Tennis Club tradition of "sweat equity," members volunteered the manpower to erect the building, which took several weeks to complete. The project was successful and the building was used as the Club's principal structure until it was replaced in 1991. The original clubhouse still serves as the tennis Field House. Building the current clubhouse was the largest project ever undertaken by the membership. Taking almost three years to design and construct, the building vastly improved the Club's social functions and golf activities.

The new clubhouse location necessitated a change in course rotation and shortly thereafter, the golf course underwent renovation by architect Brian Silva. In 2001, the Club contracted to install a state-of-the-art irrigation system to assure the protection and beautification of its primary resource–the property. In 2004, a fourth court was added to the paddle complex and, in the following year, the tennis courts were completely redone with underground irrigation and new Har-Tru surfaces.

In 2010, a Clubhouse Renovation Project expanded and improved the dining room, patio, kitchen and storage areas. As a result of this work, the Club today provides a greater social outlet for members and guests. In 2021, the membership enthusiastically approved work to expand and update the Clubhouse facilities with work that will improve the women's locker room, expand the kitchen, create a pub / lounge, add a grill room, as well as Golf Shop updates and work on the entrance hallway. Anticipated completion is summer 2022. A new master plan was also approved for the golf course highlighting bunker renovation, cart path additions and numerous hole renovations to be made over a three year period.

In many ways, MGTC has changed dramatically during its 60 plus years of existence, but retains its informality, "family and friends'' attitude, and unique culture. Most importantly, the Membership takes pride in the participative approach to Club governance and operations, with almost one half of the members participating in its various committees and activities at any one time. At its core, the Club is committed to a membership experience based on the enjoyment of golf and racquet sports, with outstanding facilities and programs. 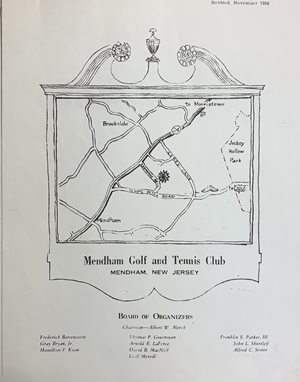